The Importance of Carrying Out a Thorough Background Check 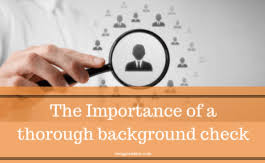 Have you ever searched for your name on the internet (google) to see what results will come out? The internet comes with unlimited advantages but one of its snags is its inability for forget a gory past.

How many times have we seen celebrities or politicians cry foul because someone dug out a past they had conveniently forgotten and used same against them? This happens all the time and is why we need to be extremely careful with our actions.

An elderly friend of mine told me about his 3 and a half acres of land in a very good part of Ibeju Lekki; a very good investment location in Lagos Nigeria at the moment (because of the huge investments the likes of Dangote and Lagos State Government are making in the area). It has the Lekki Free Trade Zone, Seaport, proposed Airport and the Dangote Refineries and Petrol Chemical Plants (currently being constructed) in the area and these are attracting a lot of attention to the zone, making it a much sort after real estate investment location.

He showed me his documents and I saw they were in order. At the time of our first discussion, he wanted to sell all the land and use the money to process documents for more land in the area belonging to his family (get excision, survey plan etc) but later when he saw the interests in the area decided to sell just one acre out of the three acres plus he has. I spoke to a couple of people about it and another friend of mine expressed interest in the one acre being offered for sale.

His price made a lot of sense and as far as I’m concerned everything about his land was in order. I mean, developers selling land for sight and service in mini estates around him currently sell for between N3.5 – N4.5 Million per plot but he was willing to sell his for N2.5 Million per plot (N15 Million for the acre). In addition to this, he is a son of the soil which makes him one of the safest people to buy from asides the Baale (the local ruler of the land).

We’ve been on this transaction for about a year now, for reasons pertaining to delayed search issues on the part of the buyer and lack of funds to execute at the time. My elderly friend (the seller) had some offers from prospects who wanted to buy in plots but he didn’t want to sell in plots ‘cos he didn’t want to deal with multiple documentation issues. He wanted one person to take the one acre off him. So, I encouraged to be patient and wait for my other friend who was the prospective buyer (since he was still indicating interest to buy).

To cut the long story short, the buyer decided to make payment last week (after several searches at the Lands registry in Alausa and a meeting with the Baale of the town to confirm ownership) however, for some reason the prospective buyer decided to google the seller’s name and found all sort of disturbing news about his past. Apparently, the seller has been arrested by the FBI in the United States of America and had been convicted for identity theft. He was in jail for about 4 years after which he returned to Nigeria to restart his life. Needless to say, this spoilt the whole transaction. I was shocked and disappointed as well but I had to accept and respect the buyer’s decision. I should have done a background check on him myself and told the seller about my findings. That way, I would have been well aware of what I was dealing with and be able to make an informed decision on whether or not to sell for him.

Although I know the seller now and can guarantee that his ways are clean, all real estate transactions are subject to contract and the buyer reserves the right to change his/her mind about the transaction at any point in time if he/she feels uncomfortable.

I thought it wise to share this experience so anyone who cares to read it may learn from it. Although I feel like I wasted a whole year on this transaction, I’m glad I came out with a lesson to share; “no matter how little, ensure you carry out background checks on both your sellers and buyers (even if they’re your friends)”.

The transaction is over now but life goes on.

SURVIVING AS A REAL ESTATE BROKER IN A CHALLENGING ECONOMY
BUYING PROPERTIES OFF PLAN.